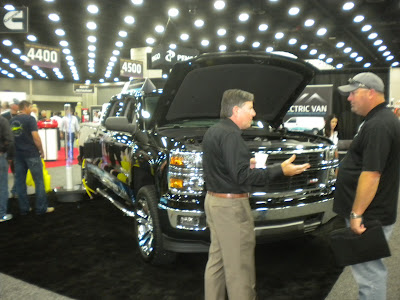 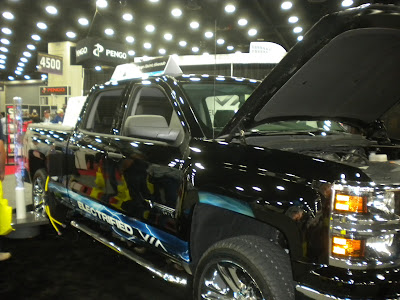 Starting in 2014 VIA Motors expected to sell its first extended-range electric-vehicles according to President Alan Perriton.

The first units were likely Chevrolet Express cargo vans purchased from General Motors and modified by VIA at its Stockton, CA, facility. Next in line are Chevy Silverado extended-cab pickups. The Orem, UT-based company also is working longer term on an electric version of the Chevy Suburban SUV, named the Presidential.

The trucks boast a 400-hp electric motor plus GM’s 4.3L V-6 under the hood, which acts as a generator and range extender for the electric powertrain. The trucks will be marketed primarily to fleets such as telecoms, utilities and government agencies, Perriton says, and will be sold under the VIA nameplate, not Chevrolet.

The EREV trucks promise a range of 40 miles (64 km) in all-electric mode and 300 miles (483 km) more per fill up using the V-6 as a range extender. The vehicles also incorporate another gasoline-powered generator that can provide auxiliary power for worksites or emergencies.

The trucks are expected to qualify for a $7,500 federal tax credit covering electric vehicles and may qualify for a total of up to $20,000 in federal and state incentives, VIA’s website claims.

In fleet use where the vehicles operate mostly under electric power, fuel costs can be cut from $0.30 per mile to $0.06 per mile, VIA claims. The company is accepting orders now on its website with a $1,000 refundable reservation. Prices are expected to start at $79,000 before incentives.

Perriton, a former high-ranking GM executive, says VIA has built 15 vehicles for evaluation and is undergoing emissions testing to meet federal and California certification.

Because of its modifications, including addition of 600 lbs. (272 kg) of batteries, VIA also will conduct front, quarter and side crash tests to meet National Highway Traffic Safety Administration standards, he says.

Some 30 potential fleet customers are supporting development of the VIA EREV trucks, including Verizon and Pacific Gas & Electric.

The recent bankruptcy and sale of A123 Systems, VIA’s sole supplier of lithium-ion batteries, is not expected to have an impact, Perriton says. A123’s assets were sold earlier this year to the U.S. subsidiary of China’s Wanxiang Group, after undergoing national security scrutiny, and renamed B456 Systems. It has plants in Livonia and Romulus, MI.

VIA has a joint venture with a partner in Mexico that plans to build van conversions in San Luis Potosi and convert Silverado pickups produced by GM in Silao.

The company also is looking at various U.S. assembly sites, preferably co-located near a GM assembly plant. GM makes the Silverado in Flint, MI, and Fort Wayne, IN, and the Suburban in Arlington, TX.

Accommodating changes in the redesigned ’14 model-year Silverado will require only minor adjustments by VIA, Perriton says. It will continue to use GM’s 4.3L V-6 in all of its conversions to take advantage of GM’s built-in engine control module and existing emission control technology.

VIA originally considered purchasing “gliders” from GM lacking engines, drivetrains and other components but has tabled the idea, Perriton says.

VIA’s modifications include stripping 5-speed transmissions and fuel tanks from stock vehicles and installing its dual-drive motor controller, electric drive motor and electric generator as well as the battery pack.

Because its trucks can serve as stand-alone generating units, VIA envisions their use as powering all sorts of equipment on site. When the batteries are exhausted, the V-6 kicks in.

“During blackouts you could pull a pickup to a substation and keep the electricity flowing,” he says. “Imagine what a boon that would have been during the recent devastating East Coast hurricane.”

VIA has looked at tying in with other auto makers but for now is limiting its arrangement to GM. “We’re not exclusive to GM, but we don’t want to take on too much,” says Perriton. “We want to stay on course and introduce the models we are developing.”