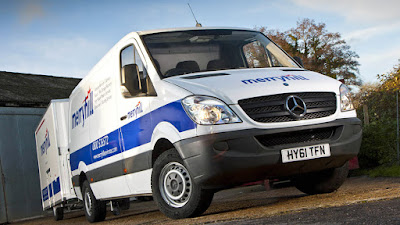 Lots of light commercial vehicles can be seen towing trailers around the country every day and we reckon that a great many of them are probably breaking the law. As soon as you hitch a trailer to a pick-up, light truck or van, a whole new set of problems present themselves and it's important that you understand these if you want to stay safe and legal.

There are a number of things to be considered. Can the vehicle tow such a big trailer? What exactly are drivers entitled to tow on their licenses? Does the vehicle need a tachograph?

The rules and regulations can be fairly complicated, but here we have simplified them as much as possible so that readers will be able to get all their questions answered in one hit...

1 Can your van take it?
Every LCV has a maximum braked trailer weight that can be towed. You need to check in the handbook to find what it is and make sure you don't exceed that limit. It's not just a case of risking being caught by the police and the DVSA and being fined. You could cause an accident too, in which case expect to have the book thrown at you in the courts.

2 Check your licence entitlement
Isuzu D-Max TowingYour driving licence shows the categories of vehicle you may drive including the size of trailer that you're allowed to tow. Older drivers are at an advantage here as the rules changed in 1997. If you passed your driving test before 1 January 1997 then you will most likely be entitled to drive a vehicle and trailer up to a combined Maximum Authorised Mass (MAM) of 8.25 tonnes.

If, however, you passed your driving test after 1 January 1997 then, unless you have taken an additional driving test — the B+E van and trailer test — you may only drive a van coupled with a trailer up to 750kg MAM, or one over 750kg MAM as long as the combined weight of the van and trailer is less than 3,500kg Gross Train Weight (GTW).

3 Watch out for overloading
There are two 'musts' here. Firstly that the load is evenly distributed over the wheels and not at one end of the trailer and secondly, that the trailer isn't overloaded. Each trailer has a weight limit and it's important to stay within it. And while we're at it, make sure loads don't stick out of the sides further than 305mm and out of the back by more than one metre.

4 Be aware of tachograph laws
How many big vans do you see on the roads towing a trailer without a tachograph fitted? Lots in our experience and they are mostly all illegal. Basically, if a van and trailer have a gross vehicle weight of more then 3.5 tonnes then they need to have a tachograph fitted, bar a couple of circumstances that we'll explain later.

This means that with a fully loaded 3.5 tonne van such as a Ford Transit or Mercedes-Benz Sprinter, if you attach so much as a skateboard on the back you'll be over the magic limit. You have been warned.

And don’t forget that if a tacho is fitted each driver of the vehicle will have to have a digital Driver Card to operate it. Cards cost £19 from the DVLA and are valid for five years.

5 Could you be exempt?
Isuzu Grafter TowingThere are two main ways you can circumvent the problem of fitting a tachograph. Firstly if you aren't carrying goods for hire or reward and secondly, if you don't travel more than 33 miles, or 50km, from base in a day. The first may be true if, say, you are taking a load of rubble to the dump. You aren't exactly carrying it for reward unless you are being paid to do so by someone else.

It's all a tad woolly, but one thing is certain; if you are stopped by the police or by the lads and lasses from the DVSA, don't expect them to just swallow any yarn you may spin them. They will want you to produce proof that you are exempt because of the above two reasons.

6 Unbraked trailer limits
If your trailer is unbraked, the maximum you may tow (combined weight of trailer and load) is 750 kg or half the kerbside weight of the towing vehicle, whichever is the LOWER. Otherwise the trailer has to have its own set of brakes.

7 Check your width
Until recently UK regulations on trailer width were different to the rest of Europe; the maximum width allowed here was 2.3m compared to 2.55m across the channel. UK rules changed in April 2010 and you are now permitted to tow a trailer or caravan up to 2.55m in width behind a goods vehicle weighing less than 3,500kg.

8 Get your brackets right
Mercedes Sprinter TowingTowing brackets must be tested to the appropriate British or European standard and use mounting points recommended by the vehicle manufacturer. Vans registered since 1 August 1998 must only be fitted with a 'type approved' bracket tested to European Directive 94/20/EC. The bracket will have a label, plate, or stamping detailing the type approval number and the vehicle for which it is an approved fitment.

9 Check your trailer
Before the start of every journey there are a number of checks that should be made. The obvious ones are to check tyre pressures, ensure all lights are working, make sure the number plate on the trailer is the same as the one on the van — and not obscured — and ensure that the wheel nuts aren't loose. All loads should be securely strapped down so bits don't fly off when you go round a corner.

10 Take care on the roads
It may sound obvious but it's easy to forget you have a trailer if you are cruising up the motorway. Your van won't feel the same as it did when it was just pulling itself so make sure you leave plenty of room to manoeuvre and don't start breaking the speed limits etc. Bear in mind that when towing, you are restricted to a maximum speed of 50mph on single carriageway roads, and 60mph on dual carriageways and motorways, provided no lower limit is in force.

We strongly recommend that if you are not familiar with maneuvering with a trailer, go to a quiet place somewhere and practice; it does take some getting used to, especially when reversing..