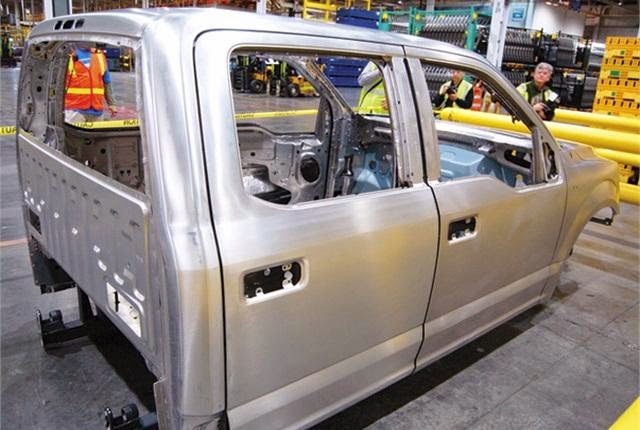 The Ford F-Series has been an icon in the pickup truck market for more than 60 years. Now in its 13th generation, the truck is up to 700 pounds lighter than its predecessor model, increasing available payload without sacrificing strength.
CalAmp, Click Here....

"What do fleet customers want? They want to haul more, tow more, and go faster. But, they want to pay less for fuel. And, that is just what this truck does," according to Scott Fosgard, F-150 communications at Ford Motor Co. "The aluminum body on a lightweight high-strength steel frame allows us to use a 2.7L EcoBoost engine so customers can choose the best engine to best meet towing and payload requirements."

This feat of structural engineering did not happen overnight.

"Back in 2008, we had a new platform for the F-150 and were thinking about what we could, and should, do," said Peter Friedman, Ph.D., manager of the Manufacturing Research Department at Ford Research and Advanced Engineering, with a background specifically in aluminum body construction. Friedman is responsible for the development and implementation of new automotive manufacturing technologies.

Prior to his current position, he led the Lightweight Materials and Processing group focused on the development of technologies that can enable expanded use of wrought aluminum products in automotive body structures.

After running, and re-running, sophisticated models, it came down to three possibilities, according to Friedman:

"Once we decided to go with lightweighting, the challenge was figuring out what we could change that would lighten the weight significantly. Not just change out a few panels here or there, but move enough weight to fundamentally change the truck enough to increase capacity and capability, and improve fuel economy — basically, make a better truck," Friedman said.

After other automakers utilized aluminum bodies, such as with Jaguar and Aston Martin, F-150 engineers decided that this was the road to take.

Ford engineers increased the use of high-strength steel in the all-new F-150 frame from 23 percent to 77 percent to create a pickup frame that is stronger, more durable, and structurally more rigid than the predecessor F-150, while saving approximately 60 pounds of weight. The remaining weight loss is due to the use of aluminum.

In designing the backbone of the F-150, Ford engineers improved the truck's fully boxed ladder frame. High-strength, military-grade, aluminum alloys are used throughout the F-150 body as well.

In 2009, Ford built a program called "Go Fast," in which the company built four aluminum F-150s utilizing the outgoing model, and performed the start of the truck's rigorous testing process.

"At the same time, we started designing the X1 — seven more trucks using the 'lessons learned,' and tested the trucks across the board," Friedman stated. "We performed the traditional durability cycle, and when we were done, we ran it 50-percent more, just because we could."

In testing the X1 prototype, the automaker had fleets test the vehicle without telling them it was an aluminum box. Fleets included those in the energy, mining, and construction industries.

The customers were told to drive and treat the trucks as they normally would in their daily working routines, but they were not told what parts of the trucks may have been different. After two years and more than 300,000 miles of abuse, teardowns, and inspections, new engineering tests and design changes were made to ensure the production box would be ready to handle customers' demands.

One thing that was confirmed: "Customers don't buy weight, but weight affects so many different things, such as fuel economy and drive quality, etc.," Friedman said. "But, if we are 700 pounds lighter, we can tow that much more, which directly impacts capability."

These updated trucks are also better in dent resistance.

"Since aluminum is roughly one-third the density of steel, you can make the metal thicker and still save weight," Friedman said. "For example, the new box floor went from 0.85 millimeters to 1.4 millimeters."

Another benefit of aluminum is that it is corrosion-resistant.

Some of the updates for the all-new aluminum truck include:

With any new program, there are going to be challenges. There were several challenges in building the all-new F-150, from requiring spot welding and changes in the assembly process to requiring a large supply of aluminum, all while ensuring that line-speed and order-to-delivery times are not impacted.

First, the new design required a much larger stock of aluminum than the automaker previously had used.

"One of the biggest challenges was access to the amount of metal we were going to be using," Friedman explained. "Our aluminum suppliers did not have the capacity for this truck. New facilities were built to handle the increased capacity, including Alcoa, that made significant expansions to their systems."

However, with proper planning and working with its suppliers, the automaker was provided with an opportunity to rethink material specifications and tailor them to Ford's needs.

"Additionally, we operated a truly closed loop process for our aluminum, with any unused aluminum going back to the provider," he continued.

Another challenge was the simple fact that many new technologies were required to build the new trucks from the new materials.

"We have three times the amount of structural adhesive in the trucks and are predominately using self-piercing rivets and mechanical fastening. We do some resistance spot welding, but it's with new mid-frequency DC-welding techniques," Friedman noted. "It is a predominately stamped vehicle, but there are hydroformed extrusions and stress-banked aluminum extrusions, which are good ways to get structure into a tight package."

"One large hurdle was the turnaround time between Job Last and Job One, which was only four weeks," Friedman added. "Last year, one truck was built every 42 seconds and the new line rate is exactly the same."