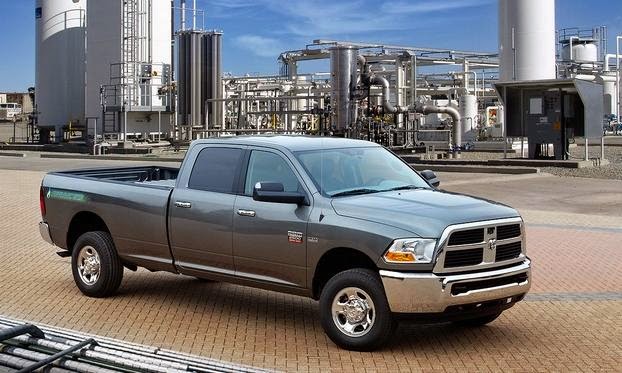 The CNG-fueled truck, originally engineered for fleet operators, is available now only in a four-door crew cab, four-wheel-drive and long-bed model. This fall, the truck will be offered in a regular cab two-door body style with two-wheel drive and a long bed.

Since it made CNG available in late 2012, Ram has sold about 1,000 of the trucks. Dave Sowers, head of commercial marketing for Ram, said expanding the availability of CNG should boost sales to fleet buyers looking for a smaller, less expensive CNG truck.

Ram officials announced the expansion of the CNG option Wednesday at the Association for the Work Truck Industry national trade show in Indianapolis.

Despite the recent drop in gasoline prices, CNG’s popularity among fleet buyers has continued to grow. The CNG equivalent of a gallon of gasoline costs roughly $1.50, compared with the national average of $2.45 for a gallon of unleaded regular, according to Gasbuddy.com.

Ram builds and covers the warranty on its CNG trucks, instead of farming the modifications out to an upfitter. General Motors and Ford don’t build their own CNG trucks but instead work with outside companies to convert trucks to CNG.

Ram’s CNG trucks also can run on gasoline, so a driver who runs out of CNG will not be stranded. Most fleet operators with CNG trucks maintain their own source of the gas and operate the trucks on defined routes.

Though CNG costs less than gasoline, trucks using the fuel must be refilled more often. A Ram truck has a range of about 250 miles on a tank of CNG. It is powered by the company’s 5.7-liter Hemi V-8.

The CNG tank is placed in the bed of the truck, just behind the cab.