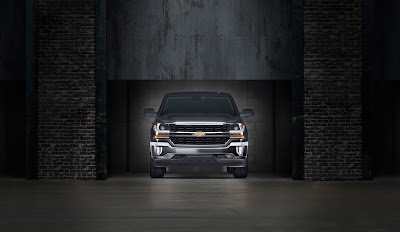 DETROIT – Chevrolet announced today that a select number of 2016 Chevrolet Silverados will be offered with eAssist technology. The new mild-hybrid electrical system leverages many of the technologies and components from Chevrolet’s lineup of innovative electric vehicles – including battery cells from the Malibu Hybrid and software controls developed for the Volt. As a result, Chevrolet can deliver a low-volume, affordably priced hybrid pickup that delivers uncompromised capability and up to 13 percent better fuel economy in city driving.

“Silverado already leads the full-size truck segment in V8 fuel economy,” said Sandor Piszar, marketing director for Chevrolet Trucks. “For customers and small-business owners who use their trucks for more urban driving, the addition of eAssist can further reduce their fuel costs without sacrificing the utility they expect in a full-size truck.”

The compact, lightweight system increases curb weight by approximately 100 pounds, and delivers an additional 13 hp and 44 lb-ft of torque from the electric motor.

The eAssist propulsion system, including the 8-speed automatic transmission, will be a $500 premium over a comparably equipped two-wheel drive Silverado 1500 crew cab in 1LT trim.

Initially, Chevrolet will offer approximately 500 Silverado eAssist trucks for the 2016 model year, exclusively through California dealers. Based on feedback from these initial customers, Chevrolet will adjust production for 2017 model year.

The eAssist system pairs a compact lithium-ion battery pack with the Silverado’s 5.3L EcoTech V-8 and 8-speed automatic transmission to provide:
-    Electric Power Boost: The on-board electric motor provides up to 13 hp and 44 lb-ft of supplemental power during acceleration and passing. The electric motor also enables the Active Fuel Management system on the 5.3L V-8 engine to operate in 4-cylinder mode for longer periods, resulting in additional fuel economy benefits.
-    Stop/Start capability: Added fuel savings are achieved by seamlessly turning the engine off when stopped at a traffic light or in congested traffic and turning the engine back on when the accelerator is pressed.
-    Regenerative Braking: By using the on-board electric motor as a generator, the energy recovered while braking is converted to electricity to recharge the onboard battery system.

Power for the eAssist system is supplied by a 24-cell, air-cooled 0.45 kWh lithium-ion battery pack located under the center console (or front bench seat) that uses the same battery cells as the Chevrolet Malibu Hybrid.  It weighs nearly 15 percent less than the previous generation eAssist system, yet provides up to 15 kW of power to the electric motor.

A reengineered power inverter module is now liquid cooled and moved underhood for improved packaging and performance.  The software used to control the battery system is based off a modified version of the software for the Chevrolet Volt.

The compact induction motor, located on the accessory drive, provides peak regen capability of 15kW resulting from advanced software controls based off those used in the Volt.  The motor, which features a stator design leveraged from the Volt and Malibu Hybrid,  acts like an electric torque booster, providing up to 44 lb.-ft. (60 Nm) and up to 13 hp (9.7 kW) of additional boost in high-load situations.

This new generation of eAssist is also more modular than the previous system, meaning it could be more easily used in front-wheel or rear-wheel drive drivetrain configurations and it’s capable of using more or fewer cells, based on power needs for each vehicle application.

About Chevrolet
Founded in 1911 in Detroit, Chevrolet is now one of the world's largest car brands, doing business in more than 115 countries and selling around 4.0 million cars and trucks a year. Chevrolet provides customers with fuel-efficient vehicles that feature engaging performance, design that makes the heart beat, passive and active safety features and easy-to-use technology, all at a value. More information on Chevrolet models can be found at www.chevrolet.com.

Who Must Stop at Scales?