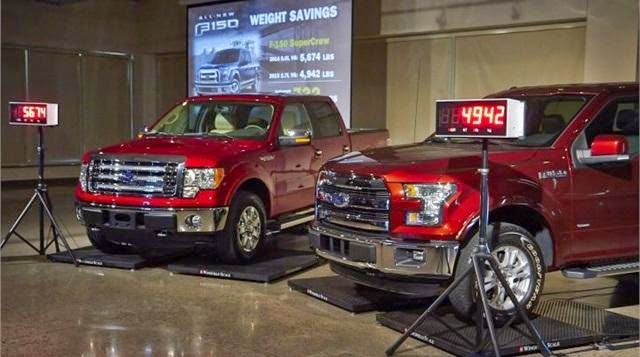 Ford executives showed two trucks on scales to demonstrate the light-weighting of the new truck when compared to the 2014 model-year version.

Ford's extensive use of aluminum pared more than 700 pounds from the weight of its new F-150 pickup truck the company weighed for the media at an event in Dearborn, Mich., last week.

Ford executives showed two trucks on scales to demonstrate the light-weighting of the new truck when compared to the 2014 model-year version. The numbers supported earlier estimates of weight savings due to use of aluminum.

About 25 pounds of the difference can be attributed to the slightly heavier V-8 in the ’14 truck, said Mike Levine, Ford's truck communications manager. The rest of the 732-pound difference, or 707 pounds, is due to use of aluminum body panels and other parts.

Otherwise the two trucks were set up the same, with one-eighth of a tank of fuel, plus coolant, oil and washer fluid.

Ford has not released the curb weights or gross vehicle weights of the 2015 F-150s, but Levine said the curb weight of a pickup truck is measured without fluids. Aluminum weight savings for smaller Super- and Regular-Cab pickups will be less.