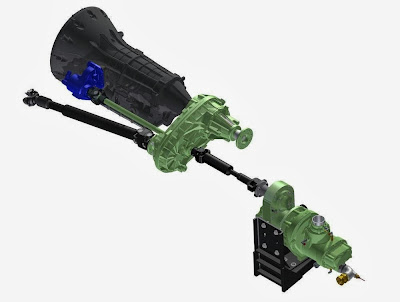 Vanair says the new system is an industry first, providing Super Duty drivers with air and electric power without the need for an underhood air compressor which requires engine modifications—possibly voiding the engine warranty—and taps into the engine’s coolant system causing unnecessary wear and tear on the vehicle.

The new system system connect a PTO to the compressor with a shaft directly through the transfer case, said Jim Perschke, Vanair’s vice president of global sales. “In the past the only options you had were either carving a spot out under the hood…or implementing a split shaft system and that can get complicated,” he said.

“This allows us to keep it simple.”

The LiveDrive system provides 90-200 cfm of air power, which Perschke said is equivalent to that of a large tow-behind compressor. “That’s 500 pounds underdeck as opposed to towing 2,000 to 3,000-pound trailer,” he said. “And the truck is still fully capable of going off road…Just make sure your truck has a rear fuel tank and not the mid-chassis.”

Plus, there’s the fuel-saving benefit of a PTO shaft-driven system: it can be geared reducing the RPM requirement for the vehicles engine.

When asked about the ordering process, Perschke said Vanair is still working it out, but customers would order at their local truck equipment facility and Vanair would ship them a kit to be installed. He said in the future that the LiveDrive system will be available during spec out at Ford dealers.