They share a passion for winter fun, a desire for excitement and a love of the outdoors! 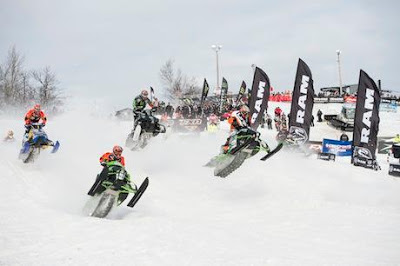 That loyalty between America’s snowmobilers and Ram Truck has now snowballed into a strong partnership and recognition of the brand’s many contributions to this popular sport.

In making the announcement, ISOC President and Race Director, Carl Schubitzke, welcomed Ram Truck to the team of tier-one sponsors. “Ram Truck has a strong track record with the sport of snowmobiling and we’re confident they’ll continue to be warmly welcomed by the AMSOIL Championships Snocross racing community."

Nowhere does Ram Truck’s storied history with the sport of snowmobiling resonate stronger than with the Ram Truck team. Fred Diaz, President and CEO – Ram Truck Brand and Chrysler de Mexico, summed it up this way.

“For winter sports, snowmobiling is the place to be. Ram Truck is looking forward to reaching a core group of truck customers through our new partnership with AMSOIL Championship Snocross.”

Fueled by that hard-earned “trail cred,” the brand has also taken on two title sponsorships for 2013: the National ACS rounds in Glyndon, Minn., in March, and the season-ending Ram World Cup event in Lake Geneva, Wis.

The crowds for these events? They come for the action and Tucker Hibbert, six-time ACS champion, is one competitor who delivers plenty of heart-stopping thrills under the sponsorship of Ram. Take a look at some of his cool moves.