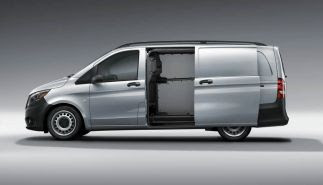 Last month Mercedes-Benz launched its new Metris van into one of the most dynamic segments of the U.S. vehicle market.

Ford stole a march on other automakers a couple of years ago when it introduced a much-improved version of the Transit Connect business van, and other automakers are still striving to catch up. The latest is Mercedes-Benz , which last month launched its  new Metris van into what has become one of the most dynamic segments of the U.S. vehicle market.

“It’s like a feeding frenzy,” Paul Butler, Mercedes-Benz’s U.S. department manager for marketing services for vans, told me. “Once one brand starts, it goes like dominoes and all the other manufacturers look at it.”

Metris debuted in October in the U.S. accompanied by a new TV commercial and at prices starting under $29,000, and Butler said it is a “just right” size between small and large new commercial vans that offers a sort of Goldilocks choice for the growing number of American fleet operators and entrepreneurs who might be interested.

That’s right, the rolling boxes that florists, big energy utilities, airport-shuttle services, caterers, industrial-repair services, limo fleets, and weekend craft-show denizens alike use to schlepp their wares and haul their fares where they’re doing business have been showing robust sales increases. Entrants in this quickly growing segment leverage both the growth of the U.S. economy and the business recovery in general, and the incessant demand by businesses for new types of vehicles that meet their entrepreneurial — and, sometimes, personal — demands.

“For the longest time, 30 to 40 years, there were just two or three choices, and vans were just a business tool,” Butler said. ”What we’ve seen since the recovery from the recession is that the economy as a whole has seen a big upsurge in small business and a change in their thought process — an openness to look at the whole landscape from a customer standpoint and choose the vehicle that best fits their needs, rather than buying the same vehicle they’ve always bought.”

Is Mercedes-Benz concerned that marketing such a workaday van will do little to burnish its premium image? “It’s a premium commercial van,” Butler offered. “It has the durability, quality and reliability of any Mercedes-Benz product, and a lot of the standard features that you’d find in an E-Class sedan, including adaptive cruise control and active parking assist.”