Share this article via
Explaining the GVWRs, the SRWs and the DRWs 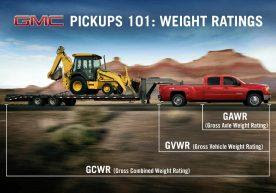 Editor’s Note: For more than 100 years, GMC pickups have come in many varieties to suit a wide range of customer demands. From that have come a number of acronyms for various capacities and features. This third in an occasional series of “GMC Pickups 101” features explains those jumbles of letters.
DETROIT – Nearly every full-size pickup owner has a unique use for his or her truck. And considering the GMC Sierra’s 19 different cab and box combinations, the veritable alphabet soup of models practically has its own language of acronyms.
Some of the most important truck acronyms for owners to know are gross weight ratings. Exceeding any of a truck’s weight ratings is unsafe, and it’s a driver’s responsibility to know and avoid exceeding them.
“Nearly every vehicle performance attribute is designed and tested to one or more gross weight rating,” said Robert Krouse, General Motors trailering engineer. ”Body and chassis structural durability, powertrain and driveline durability, handling, braking, thermal and propulsion performance are all validated to specific ratings. That’s why it’s so important for owners to understand those limits.”
“It’s very important that drivers observe these limits to maintain safe stopping distances,” said Krouse. “Not only that, overloading a truck causes excessive wear on suspension and brakes and could lead to engine or transmission failure.”
The 2013 Sierra’s highest GCWR is 30,500 pounds for a 3500HD Duramax DRW model. DRW, another truck acronym, applies only to 3500HD one-ton pickups. It implies a “dual rear wheel” option, as opposed to a “single rear wheel,” or SRW.
The option adds not only higher payload and weight limits, but also better stability with a large trailer attached. For a 2013 Sierra 3500HD 4x4 Crew Cab, a DRW option adds 5,700 pounds of available trailer weight rating and 1,011 pounds of payload capacity.
GMC has manufactured trucks since 1902, and is one of the industry's healthiest brands. Innovation and engineering excellence is built into all GMC vehicles and the brand is evolving to offer more fuel-efficient trucks and crossovers, including the Terrain small SUV and Acadia crossover.  GMC is the only manufacturer to offer three full-size hybrid trucks with the Yukon, Yukon Denali SUVsand the Sierra pickup. The Sierra Heavy Duty pickups are the most capable and powerful trucks in the market. Details on all GMC models are available at http://www.gmc.com/, on Twitter at @thisisgmc or at http://www.facebook.com/gmc.
Share this article via