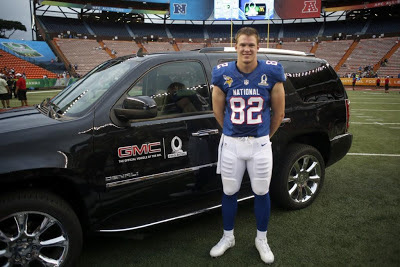 DETROIT – GMC will have more than 450 vehicles on display and driving around New Orleans during its activities throughout Super Bowl XLVII Week.
They include:
Never Say Never Moment of the Year
By voting at www.NFL.com/GMC, football fans have had the opportunity to help decide the “2012 GMC Never Say Never Moment of the Year” from five finalists selected earlier this month. The winner will be announced during the second annual “NFL Honors” awards show on CBS the night of Feb. 2.

“Like our owners and engineers do every day, the five finalists demonstrated a ‘Never Say Never’ attitude that helped their teams win,” said Craig Bierley, GMC Advertising and Sales Promotion director. “All five have proven they are equally deserving, but only one can be crowned this year’s top performer.”

Fans who vote for their favorite performance will also be eligible to win a new 2013 GMC vehicle of their choosing.

NFL Experience
GMC will be the presenting sponsor of the 21st edition of NFL Experience, pro football’s interactive theme park, taking place at the Ernest N. Morial Convention Center from Wednesday, Jan. 30- Sunday, Feb. 3. The NFL Experience features activities for football fans of all ages and appearances by more than 100 current and former NFL players.
Football legends Barry Sanders, Jim Brown and Jerry Rice will be among the athletes meeting and greeting fans at the GMC display area.
Fresh off its first public appearance at the North American International Auto Show in Detroit, the all-new 2014 GMC Sierra will show its bold new design in an “Auto Show” space constructed within the convention center.
Also included is an interactive display that takes a series of photos of fans catching a pass in front of a stadium backdrop that can be posted to social networks like Facebook or Twitter.
Additionally, attendees will have an opportunity to create a pre-game video segment with announcer Mike Tirico and win prizes including autographs and signed memorabilia.
On Sunday, Feb.3, GMC will be the presenting sponsor of the Game Day Fan Plaza, which will provide fans with additional opportunities to meet players and experience the brand’s newest vehicles.
GMC also had a presence at last weekend’s NFL Pro Bowl in Hawaii. The brand provided transportation for approximately 2,000 children of parents in the military to attend open practice and 500 tickets to the game to the U.S. Pacific Command for wounded warriors. Pro Bowl MVP Kyle Rudolph will also be given a GMC of his choosing for his game-changing performance.
GMC has manufactured trucks since 1902, and is one of the industry's healthiest brands. Innovation and engineering excellence is built into all GMC vehicles and the brand is evolving to offer more fuel-efficient trucks and crossovers, including the Terrain small SUV and Acadia crossover.  GMC is the only manufacturer to offer three full-size hybrid trucks with the Yukon, Yukon Denali SUVs and the Sierra pickup. The Sierra Heavy Duty pickups are the most capable and powerful trucks in the market. Details on all GMC models are available at http://www.gmc.com/, on Twitter at @thisisgmc or at http://www.facebook.com/gmc.
Share this article via