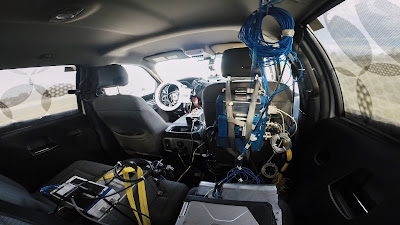 DEARBORN, Mich., Nov. 3, 2015 – Ford is licensing robotic test driving technology to other automakers. The industry-first technology saves time and spares human drivers from such physically demanding tasks as driving over curbs and through potholes in durability testing.

“Several automotive OEMs have already placed orders to purchase systems for their own testing.”
Robotic durability testing includes a control module installed in the test vehicle that controls vehicle steering. Ford-developed bell crank actuators control the throttle and brake pedals with a metal rod. The module is set to follow a preprogrammed course, and the vehicle’s position is tracked by cameras in a central control room and via GPS accurate to plus/minus one inch.

Should the vehicle stray from its course, engineers have the ability to stop it, course correct as necessary, and restart the test. Onboard sensors can command a full stop if a pedestrian or another vehicle strays into the test vehicle’s path.

The innovative technology is helping to ensure the all-new 2017 F-Series Super Duty – Ford’s toughest, smartest, most capable Super Duty ever – is Built Ford Tough. Super Duty has undergone the equivalent of years of abuse and durability testing in a short amount of time to ensure it will hold up to a lifetime of the hard work its owners expect.

Ford has granted a patent license to ASI, providing the company rights to incorporate and use its bell crank actuators in the systems ASI sells to other automakers and suppliers to test cars, trucks, buses and military vehicles.

“We’re proud to work with Ford to help develop this technology and to be granted a license from Ford Global Technologies,” said Mel Torrie, CEO, ASI. “The enhancements we’ve made with Ford will improve the durability, reliability and performance of these systems – allowing for even more accurate testing and higher-quality vehicles.”

In use since 2013, Ford’s latest generation of robotic testing technology has seen significant improvements in reaction time and accuracy of the throttle and brake. Patented new design changes simplify installation, resulting in reduced installation time. Other changes enable fewer modifications to test vehicles and improved system performance with better component response. The system can quickly be deactivated, allowing a test engineer to gain control of the vehicle from the driver’s seat.

Ford Motor Company, a global automotive industry leader based in Dearborn, Mich., manufactures or distributes automobiles across six continents. With about 197,000 employees and 67 plants worldwide, the company’s automotive brands include Ford and Lincoln. The company provides financial services through Ford Motor Credit Company. For more information regarding Ford and its products worldwide, please visit www.corporate.ford.com.

Autonomous Solutions, Inc. (ASI) designs and manufactures unmanned vehicle systems, software, and components that are OEM independent. These robotic kits can be leveraged in a variety of industries including mining, agricultural, automotive proving ground, military industries and industrial applications. For over 15 years, ASI has been a leader in vehicle automation. Unlike many robotics firms, ASI has a strong software team which makes up over half of its engineering work force. ASI’s Mobius software allows for command and control of a fleet of vehicles in various industries. ASI has grown to become one of the largest privately held robotics-focused companies in the world. ASI employs a team of world class computer, electrical, and mechanical engineers and support staff at our 100 acre proving ground facility in Northern Utah. For more information regarding ASI and its unmanned vehicle solutions, visit www.asirobots.com.

HOW SAFETY INSIGHTS CAN HELP CITIES LIKE WINDSOR IMPROVE THEIR STREETS